“Do you recommend using both Einstein Behavior Score and the Pardot Prospect Score functionality at the same time?” was a question that came to me recently that grabbed my attention.

One could break this question into two parts. Firstly, can you use Einstein Behavior Score at the same time, and secondly, should you use both simultaneously. I wrote a post outlining the differences between the two when Einstein Behavior Score was first released for Pardot Einstein, so I will leave you to review the comparison before I cut to the chase here. Yes, you can use both together, and I believe you should use them both – here’s why.

Why Use Einstein Behavior Score and Pardot Score

Pardot Einstein delivers some of the best innovation in B2B Marketing. You should ride this wave if you have access to it (note: Pardot Einstein is only available to certain Pardot editions).

There will be a transition period, especially if Pardot score is being used in automation rules, assignment logic, or the sales team rely on score to prioritise their leads. Most organisations will remember the effort that went into embedding score into the lead processes; not only should you not simply ‘pull the plug’, but monitor how Einstein Behavior Score compares to the Pardot score for the same prospect. If you plan to transition one day, it’s highly likely you will have new thresholds to work with, for example the score at which you consider a prospect MQL, or the magic number for assignment.

Einstein Behavior Score crunches a lot of prospect engagement data behind the scenes and, almost miraculously, produces a list of signals AKA. rationales per prospect (lead or contact record). These are split into ‘Top Positives’ and ‘Top Negatives’, for example, ‘Prospect’s email open rate is in the top 10% of your prospects in the last quarter’ would be a positive signal.

How did Einstein come to that conclusion? What engagement data is it using? What if it took into account some prospects activities that you didn’t want included? You can explore these factors using the Einstein Behavior Scoring Dashboard to explore the weighings that the  AI-enabled model has assigned. All in all, you need more of a trusting relationship with the AI-enabled model, that it’s discounting anomalies under the hood. 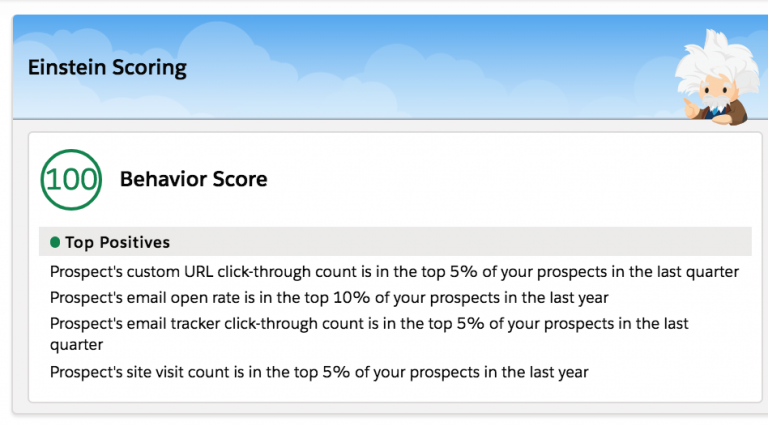 With Pardot Score, however, you are able to control the specific number of points that each activity should add to the prospect’s score – plus, be able to manipulate the points further by weighting a submission for a particular form with more points than the baseline for all other forms. You can even pinpoint specific prospects and apply a score increase or decay, right down to the individual. Marketers find these capabilities come in handy – with Behavior Score, you have to learn to be hands off.

So, what are the benefits of a limited score? It’s neat, you know what the maximum is, and from that, you know where a prospect sits on the scale. The data model retrains itself every 10 days, learning from the new data that has been generated in that time. Behavior scores will increase and decay automatically, without intervention.

Have you ever had scores in the thousands? Tens of thousands? How did these people get there, is there some activity or automation that is causing their score to climb uncontrollably?

The previous point rings true again, that rules-based score can be controlled with a marketer’s intervention.

Number of Activities vs. Likelihood to Convert

Let’s not forget that the two scores exist to track two different things.

Pardot score shows the number of points a prospect has accumulated from each prospect activity recorded by Pardot; Einstein Behavior Score shows the likelihood a prospect will convert AKA. buying intent, based on the patterns of activities that other prospects took before they converted.

The chance of a prospect converting is clearly a more sophisticated measure to track.

How to Practically Use Both Einstein Behavior Score and Pardot Score

You’ve been reading about why you should use both types of score throughout this post. Let’s look at how you can put this into practice, to get those numbers in front of your teammates.

Both scores can be used as a:

*You will need to create a custom field to achieve this.

As you can see, it’s not an all-or-nothing usage of one type or the other. You can perhaps begin to phase out Pardot Score in favour of Behavior Score in one part of your process, for example, list views for lead prioritization could be the first to turn.

Finally, I wanted to give you an idea of the potential work involved in fully transforming to Einstein Behavior Score, all those Engagement programs, Automation rules you have in your account will need to be amended one-by-one!