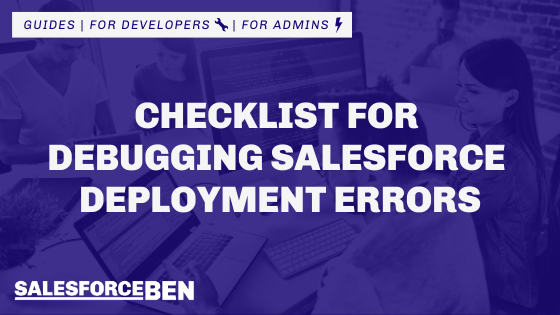 Andrew Davis is a Product Manager for Copado, building tools to enable enterprise Salesforce implementations. He is a Salesforce DevOps specialist.

Here are 9 steps I recommend you take when faced with debugging deployment errors:

To reduce the frequency of deployment errors, focus on deploying small batches of changes frequently. In the case of org-based development, ensure that developers are making use of feature branches that run validations of the metadata in their branch against the next higher org (ex: QA). If the metadata in a feature branch validates successfully it is likely to also deploy successfully when merged with the main branches and deployed to higher orgs.

As mentioned earlier, using Salesforce DX scratch orgs for development greatly simplifies the development process since it removes the need to hand-pick metadata items from a source org, a very error-prone process. Instead, Salesforce DX works through pushing and pulling metadata to and from a scratch org in its entirety. In most cases, this ensures that the metadata is coherent.

These tips and more can be found in my book Mastering Salesforce DevOps: A Practical Guide to Building Trust While Delivering Innovation.

One thought on “Checklist for Debugging Salesforce Deployment Errors”